The Endocannabinoid System and medicinal CBD

Currently, medicinal CBD is the natural cannabinoid that is recognized as having the most beneficial effects for the treatment of some symptoms and diseases, as it is a safe and non-addictive substance, which is why many scientists and doctors around the world are testing and confirming its therapeutic properties.

The human body has its own cannabinoid system, which is involved in the modulation of diverse physiological functions of our organism such as learning and memory; the control of emotions and humor; stress management; the appetite; the perception of pain; inflammation; neural toxicity and trauma; energy homeostasis; and finally, in the mediation of physiological processes at the neuronal, cardiovascular, digestive, reproductive and immunological levels.

CBD is one of the main cannabinoids in hemp, with numerous therapeutic qualities without psychotropic effects and completely legal to consume.

Natural plant cannabinoids potentiate and balance the endocannabinoid system of our organism, one of our main metabolic systems involved in the regulation of:

Some people use cannabis for recreational reasons. However, among the many bioactive substances present in the plant, there are also plenty with no psychotropic effect, such as CBD.

The CB1 receptors of the endocannabinoid system are present in all types of neurons of the central nervous system, so the plant cannabinoids can be used to treat almost any type of pain.
Although THC is the most effective component for palliative treatment, CBD also has analgesic properties.

CBD reduces tissue inflammation, which may contribute to the symptomatic relief of several pathologies.

Among the different phytocannabinoids present in the cannabis plant, CBD and CBN have an anti-stressing effect and can help you get to sleep. THC is used in some countries to treat post-traumatic stress.

The receptors of the endocannabinoid system change their expression in several types of tumors, and their activation can play a key role in processes of apoptosis and autophagy.
In certain types of tumors, such as pancreatic cancer, glioblastoma multiforme and malignant melanoma, studies using cannabinoids are obtaining encouraging results.
However, scientific evidence is only available regarding the anti-tumoral effect of cannabinoids in in vitro and in vivo experiments in non-human animals, but we do not have sufficient clinical evidence to claim that it is an antitumor agent capable of reversing illness in humans.

CBD reinforces the calcification of the bones and improves the evolution of fractures, accelerating their repair.

Protection of nerves and brain tissue

CBD has shown to be highly efficient as a neuroprotector, protecting not only the neurons but also the rest of the cells that make up the nervous tissue.

CBD and other cannabis derivatives can have a relaxing effect on the body.

CBD can be used effectively in the treatment, among others, of refractory epilepsy, and new applications of cannabis derivatives are discovered every day in the treatment of tics and seizures. 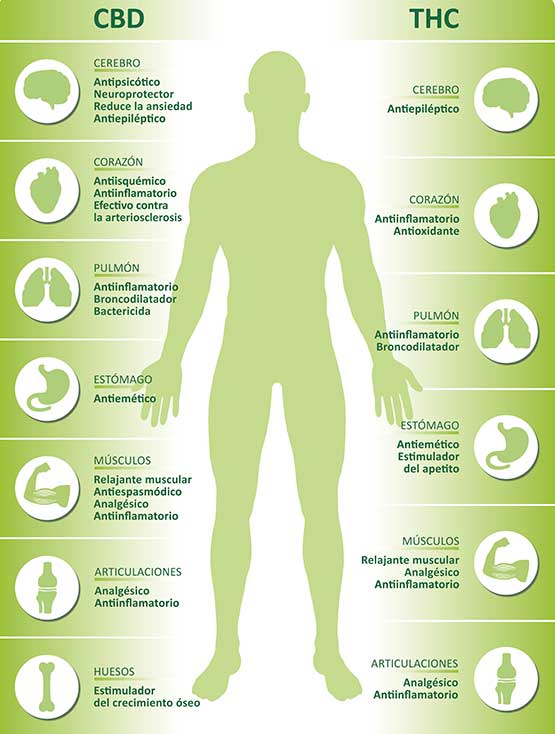 Cannabis is a very complete and versatile plant composed of some 500 substances with biological activity (cannabinoids, terpenes, chlorophyll, etc. ...). Among these substances more than a hundred phytocannabinoids (cannabinoids of plant origin) have been described, of which twenty have been studied in certain depth, although all have therapeutic qualities, and are clearly divided into two branches: the psychotropic and the non-psychotropic.

Cannabinoids are chemicals that activate cannabinoid receptors that are in the brain and in the rest of the body. In addition to phytocannabinoids, there are also endocannabinoids (endogenous cannabinoids, which is the same thing i.e. produced by our own body) and synthetic cannabinoids (created by pharmacists). 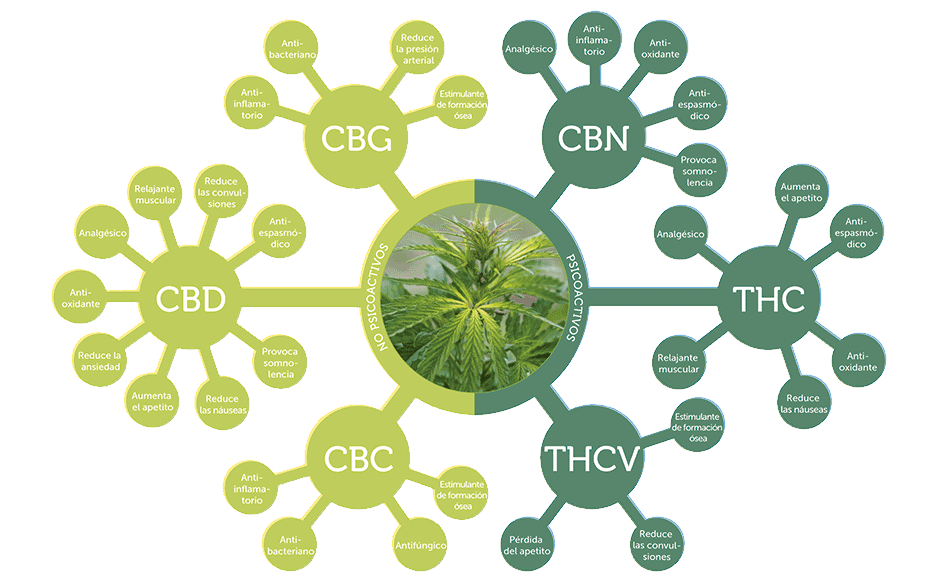 This cannabinoid is characterized by having many of the therapeutic properties of cannabis, but without causing psychoactivity (a sensation of intoxication) in the person who consumes it. CBD has antioxidant, anti-inflammatory, anticonvulsant, antipsychotic, antidepressant properties, protects the neurological system and reduces the negative effects of THC (such as anxiety or tachycardia). Thanks to the absence of psychoactivity in CBD, its consumption is 100% legal.

Perhaps the most well-known cannabinoid of cannabis, tetrahydrocannabinol, besides causing the sensation of intoxication due to its psychoactivity, is also responsible for many of the therapeutic effects of cannabis; among these are the reduction of nausea and vomiting, pain and muscle spasms, as well as an improvement in sleep and appetite. It is a powerful analgesic and antioxidant.

It is psychoactive and, in addition, also has therapeutic properties such as the ability to stimulate bone formation, as well activate the appetite and reduce convulsions.

Cannabinol -CBN- is another of the cannabinoids that possess psychoactive properties; It is similarly responsible for multiple therapeutic effects, acting as an analgesic, anti-inflammatory, antioxidant, antispasmodic and as a sleep regulator.

Cannabigerol does not have psychoactive properties, but it does have multiple therapeutic effects since it is anti-inflammatory, antibacterial, stimulates bone formation and reduces blood pressure.

This cannabinoid stimulates bone formation and is also antifungal and anti-inflammatory.

Do you need information about

Come to our Center!

You can find out more about what cookies we are using or disable them in SETTINGS.

This website uses cookies so that we can provide you with the best user experience possible. Cookie information is stored in your browser and performs functions such as recognising you when you return to our website and helping our team to understand which sections of the website you find most interesting and useful.

This website uses Google Analytics to collect anonymous information such as the number of site visitors, or the most popular pages.

We use marketing cookies on the part of our provider Shopify, in our online store.

These cookies store information on user behavior obtained through the registration of your browsing habits, which allows you to develop a specific profile to offer commercial information adapted to your tastes and preferences. They also allow the effective management of advertising campaigns and can store information on user behavior that allows developing a specific profile to display advertising based on it.